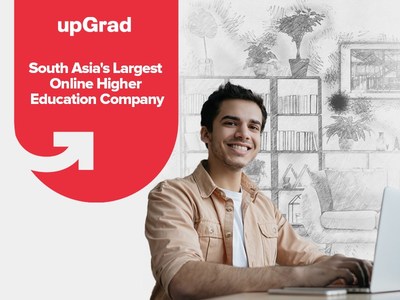 Forecasts 25% revenue growth & profitability in the next Quarter

BANGALORE, India, April 6, 2021 — upGrad, South Asia’s largest higher edtech, today announced that it has crossed the milestone of USD 14 Million a month and achieved an Annual Revenue Run rate (ARR) of USD 165 Million. The edtech major now targets 25% revenue growth in the next quarter (April-May-June) with profitability in sight.

Ronnie Screwvala said, “It’s been a tough Covid year. I know many have said 2020 was a break-out year for edtech, but on the contrary, I can clearly see Higher Education hitting its massive inflection point once the pandemic settles down.  Most of us are wondering what will ‘change’ post the pandemic, but at upGrad we are building on what will not change for the next many decades – the future of online and LifeLongLearning. And that allows us to build a global company, at scale.”

upGrad Co-founder & Chairman Ronnie Screwvala is one of Asia’s most successful entrepreneurs, having ranked amongst the 100 most influential people in the world by Time 100 and amongst 25 Asia’s Most Powerful people by Fortune Magazine. He founded media conglomerate UTV which was listed in India, and on the AIM/London Stock Exchange, before divesting it to Walt Disney at an enterprise value of USD 1.4 billion in 2013. Screwvala, along with his co-founders in his second innings is committing to building upGrad as a global leader in online education.

2020 was the year where upGrad grew by 100% in revenues, tripled its course offerings, hit the ball out of the park on global MBAs, scaled university partnerships, put together a crack global team, crossed 1 Million learners across 50+ countries, delivered 10 Million hours of Learning experiences, and closed 3 acquisitions.

upGrad’s success can be seen through it beefing up its leadership team with the hiring of ex-Grab leader Saranjit Sangar as CEO – EMEA, ex-Disney chief Zubin Gandevia as CEO – APAC, followed by developing the four-member board comprising of distinguished leaders for its UK operations and appointment of more leaders to drive business & university partnership across the US & Indonesia.

“For us to get to our USD 2 Billion Revenue goal by 2026, we are well placed in all our building blocks. In 2021 & 2022, we will be linking all the dots in LifeLongLearning – from anyone entering college, to all the way to retirement, and everything in between. The consolidation of our international expansion and strategic acquisitions will further fuel non-linear revenue growth in 2021. upGrad’s differentiator of deep learning, record 85% course completion ratio, along with meeting career goals of learners, will keep us a market leader and a partner of choice for our learners and academia alliances around the world,” concluded Screwvala, Co-founder & Chairman, upGrad. 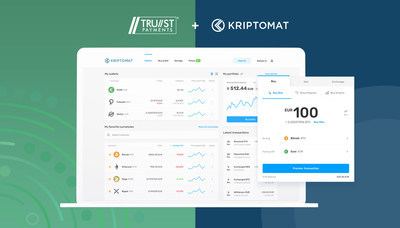 Trust Payments, the global unified payments group, has partnered with Kriptomat to power the payments engine behind Kriptomat’s cryptocurrency exchange.

Operating from Estonia since 2018, Kriptomat describes itself as “the most user-friendly government-regulated European cryptocurrency exchange.” Targeting cryptocurrency beginners, Kriptomat empowers everyday people to purchase, store, send, and receive cryptocurrencies without mastering the technical jargon and arcane details required at conventional crypto exchanges. Kriptomat’s mission is to give everyone online tools to manage and grow their digital assets and to make these tools available wherever users are. Kriptomat services and tools are currently available to users in more than 20 languages.

Kriptomat offers a full suite of portfolio management tools for beginning and experienced investors. Kriptomat allows customers to purchase, convert, track, store, and manage crypto funds via a web-based dashboard that provides comprehensive data on cryptocurrency prices, technical details, and market trends. All data can be accessed from Kriptomat’s free applications for iOS and Android mobile devices as well.

Trust Payments is a key payments player in the crypto space, offering crypto merchants the opportunity to minimise risk and break new ground. The exclusive agreement with Trust Payments ensures that Kriptomat’s customers will have access to Trust Payments’ best-of-breed payment platform for debit and credit cards, fraud screening, and multi-currency processing – plus a recurring-payments engine that will power the launch of a new subscription model for Kriptomat. The subscription model will allow consumers to set up recurring purchases of their chosen cryptocurrencies. Users can set up automated weekly and monthly purchases to automate savings, save time, sidestep the risks of day trading, and build their investment portfolios painlessly.

“We are excited to support Kriptomat with their expansion plans,” said Craig Brightly, Trust Payments head of sales. “Our dedicated cryptocurrency team understands the unique challenges crypto businesses face when searching for a payments partner. We believe it is critical to support crypto exchanges with simple terms, expertise in navigating new markets, fast settlement, and an easy application process.”

“The partnership with Trust Payments allows us to offer secure, reliable transactions to our customers,” said Dejan Davidovic, COO of Kriptomat. “Trust Payments is able to cater to all of our requirements, which will help us launch new products and features such as recurring buy. We are looking forward to expanding our partnership and offering even more features that will empower users to manage their portfolios more conveniently and profitably.”

e-Money today announced it is integrating with Algorand to support a range of fully backed European stablecoins across the Algorand ecosystem, including eEUR, eCHF, eNOK, eSEK, and eDKK. Stablecoins–digital currencies designed to maintain stable value by being linked to a fiat currency or other exchange-traded commodity–have grown substantially in popularity, driven by demand for price-stable assets in the fast growing crypto capital markets.

This integration will enable faster time-to-market for applications built on Algorand looking to offer native currency options to users throughout Europe and drive adoption of Algorand-based applications among European users given currency familiarity. In addition to being available for purchase directly from e-Money, these Algorand-compliant European stablecoin offerings will be listed on several decentralized exchanges in the coming days, further increasing the supply in circulation.

With e-Money, European stablecoins are fully collateralized, backed with actual bank deposits and government bonds held at commercial banks. Uniquely, e-Money’s currency-backed stablecoins each utilize a dynamic peg that tracks the underlying interest rate, meaning that stablecoin holders benefit from accrued interest on their assets even when just sitting in a user’s wallet. In addition, e-Money’s services operate in full compliance with AML/CTF legislation, and the platform is transparent, undergoing a quarterly audit by Ernst & Young.

“We’re excited to be bringing e-Money stablecoins to Algorand protocol. We already see a number of exciting projects being built on Algorand and expect this development to continue at an increased pace. By joining the Algorand ecosystem, e-Money will establish itself as a go-to partner for Algorand projects interacting with real-world economies, thereby expanding our user base and strengthening our position as a leading issuer of trustworthy European stablecoins.” — Martin Dyring-Andersen, e-Money Founder & CEO.

“Interest in stablecoins is booming, and it’s great to add e-Money’s offerings to those fiat-backed assets already circulating on Algorand, like QCAD, backed by Canadian fiat and BRZ, backed by the Brazilian Real,” said David Markley, Director of Business Solutions at Algorand. “Integrating with e-Money will expand overall access to the Algorand ecosystem and help accelerate European market growth for many of the innovative and useful protocols on the network, from DeFi solutions to NFT marketplaces and beyond.”

Contegix, a leading provider of managed application solutions and DevOps consulting services today announced the acquisition of Ascend Integrated. Ascend Integrated, an Atlassian Gold Partner, delivers advanced system solutions for Agile, DevOps, and system implementation and is primarily focused on the federal government market. This acquisition will augment Contegix’s expertise in Agile, SAFe, DevOps, ITSM, and solidify Contegix as the leading provider of Atlassian solutions to the public sector.

“The acquisition of Ascend Integrated positions Contegix as the leader in DevOps solutions to the Federal market,” said Brad Hokamp, CEO of Contegix. “We selected Ascend Integrated because of the team’s depth of technical expertise and proven success in implementing complex systems at scale.”

Ascend Integrated has delivered solutions to large government entities including the United States Air Force, the United States Space Force, The Department of Health and Human Services and the Department of Commerce. Additionally, Ascend has a proven track record of implementing DevOps solutions and services for multiple commercial organizations, healthcare organizations, and financial institutions.

“Our mission of providing quality Agile IT and secure DevOps solutions aligns perfectly with the Contegix vision of accelerating innovation,” said Michael Brown, Founder and CEO of Ascend Integrated. “Now more than ever, customers will be able to take advantage of a wide range of services, resources, and expertise to directly support their Agile and DevOps goals following this merger. Additionally, Contegix’s FedRAMP compliant cloud provides customers with a secure, compliant environment.”

How To Streamline Your Startup

How To Have The Perfect Networking Event