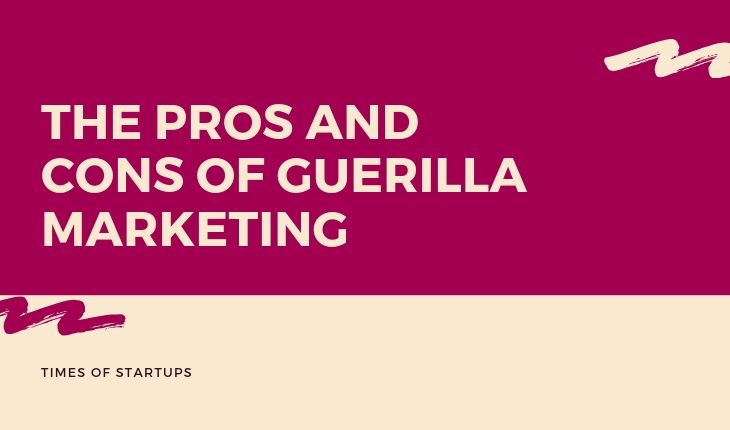 When talking about various marketing methods, people often times neglect everything that isn’t considered to be mainstream marketing. Different ads (TV, newspaper, online), billboards, gift cards, stationery items, among other things are all very popular in today’s day and age, but what about some of the more unconventional marketing strategies and techniques out there?

So, what exactly is Guerilla Marketing?

While ’traditional’ marketing clearly does the trick (when done the right way, obviously), there’s also a constant need for the so-called ’guerilla marketing’, especially for smaller businesses. The term guerilla marketing encompasses the strategy that involves the surprise element, resourcefulness, uniqueness of approach, creativity, changing brand perception; it’s also strongly connected to virality and creating that much sought-out ’wow’ effect, which also means that guerilla marketing is deeply location-oriented. So, what exactly are the pros and cons of this approach?

Examples of this unconventional marketing technique

Before we try to sum up the (dis)advantages of guerilla marketing, let’s give you some concrete examples of this method.

Guerilla marketing involves a lot of budget and DIY strategies like graffiti, stickers, and undercover marketing, which adds up to the element of surprise and shock. The idea behind guerilla marketing is to get people’s attention in a more unconventional way.

These ideas may revolve around things like cleverly put stencils or stickers around the city, or things that flat out demand the heed and expectancy. For instance, a large group of people may just start running out of blue. Naturally, people around are going to get confused and curious, so they’ll try to find out what’s going on. After some research, they eventually find out that the whole stunt was intended to promote new running shoes, for example.

The Pros Of Guerilla Marketing

If you play your cards right, guerilla marketing can be an awesome strategy. It can generate amazing results without costing a fortune. When speaking about costs, we should also mention that guerilla marketing is often times considered to be a low budget form, but this really doesn’t have to be the case. Most people associate this method with creativity and relying on word-of-mouth strategy. And while this is true in most instances, there are also examples where it’s so clear that the company invested a lot of money in something which can be considered to be guerilla marketing.

This technique involves high(er) levels of creativity and appeals to people this way. Guerilla marketing tries to speak to the audience in a more unconventional way and isn’t obsessed with ’selling’ something so blatantly. Instead, it tries to bring in the element of play by creating some kind of a stunt, performance, or a gimmick. Simply put, guerilla marketing tries to get under people’s skin.

The Cons Of Guerilla Marketing

That kind of approach can be rather risky as well. In case you fail to create that atmosphere, things can get very wrong and you may end up hurting your business much more than you think. That’s why guerilla marketing needs to be carefully planned, step by step. And even if you do that, there’s no guarantee that people will like it and that it will go viral.

The least damaging thing would be to create a strategy that no one notices. But even then, you’re the one who’s essentially at loss. It doesn’t matter if you’ve invested any money in it or not, you’ve still put a significant effort into this, and to no avail. Like we’ve mentioned, it’s a hit-or-miss strategy, so you need to ready yourself that it can turn out to be a complete failure. If this concerns you too much, or you don’t have enough time to gamble with this unconventional marketing technique , maybe you should consider some of the more traditional approaches after all.

Is this form of marketing Really For You And What’s Wrong With The Traditional Marketing?

You may still be wondering ’What’s so special about this guerilla marketing?’, and rightfully so. While guerilla marketing may sound interesting to some, it can be a total waste of time, energy, and money when it’s all said and done. The best thing you can do marketing-wise is to try to correctly asses the situation you’re currently in. Like we’ve said, guerilla marketing is mainly designed to create that buzz and pzaz.

But if you’re more of a conventional company, you might want to stick to the standard and regular ways of advertising your business or a product. Stuff like billboards, newspaper and TV ads, brochures or acrylic stands are all great choices, and shouldn’t be disregarded by any means. But if you’re a start-up company that’s just trying to make it to the top, you can try your luck with this guerilla ’hit-or-miss’ strategy.

Weighing In On Guerilla Marketing Some More

The risk that is usually connected to guerilla marketing can also leave a huge space for misinterpretation. That’s something you always want to avoid, in any form. One good (bad) example would be the Boston Mooninite Panic, in 2007. The Boston Police Department and the Boston Fire Department mistakenly identified LED placards as improvised explosive devices.

Even though these are extreme cases that don’t happen very often, the general advice would be to be very cautious with these guerilla marketing strategies. On the other hand, there are numerous other examples out there, which prove that guerilla marketing can be a great option and something that’s definitely worth looking into.

When it comes to unconventional marketing techniques, no one can give you an unambiguous and unequivocal answer to the question of whether you should go for it or not.

As we’ve tried to emphasize throughout this article, the most important thing is to try to assess the situation the right way in advance. No one can tell you if the action is going to be a success, going viral and reaching the audience all around the globe, or is it going to be a complete failure and a waste of everyone’s time.

If you strongly feel like you have a good idea and a plan, we’d encourage and recommend you to go for it. If not, maybe you should stick with some of the more regular marketing strategies, that have proven to be working well in the past.

Lucas is a Freelance writer & Editor-in-chief at savingforserenity.com,Sydney, Australia.